PhoneMe is a project implemented by Digital Literacy Centre at UBC Learning Exchange in Vancouver’s Downtown Eastside (DTES). Our team is working with the poets living in the DTES to confront the negative stereotypes about this neighbourhood as a place of despair. As they walk the streets of the DTES, project participants record poems by dialing a PhoneMe Project phone number. Back at Digital Literacy Centre we upload these poems (audio and written text) onto an interactive map of the DTES and tag the location where the poem was created or a place what the poem is about. Through sharing their poems with PhoneMe project DTES residents paint a picture of their community on their own terms and using their own words. Our project is now in week eight.

The theme of week eight was blackout poetry. Blackout poets use already existing text and remove words from the page to create a new text – their poem. Blackout poetry is a captivating exercise, you really don’t know where it will take you and what poems you will have as a result. Blackout poetry uses any text available to the poet. It is a creative exercise that also leaves strikingly beautiful pages behind. See here for useful tips on how to create blackout poetry.

There were five of us in the workshop this week and we were all given the same text, a spam email selling prescription drugs. 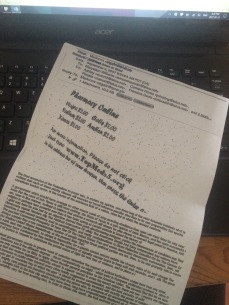 This email, however, had one peculiarity. In order to pass spam filters, it included gibberish text, compiled from several websites. At first sight, the text made sense, but as we read closer it became clear that the text is complete nonsense. This made working with the text challenging but liberating at the same time.

There were five of us and everyone was given the same text, yet we all created completely different poems. Some of the words repeated, but the way we combined them was our unique creative process. Our project leader Kedrick James says that in the years he’s been using the text he has never seen two identical poems created.

This is my poem created in the workshop. I wasn’t expecting it to be, but it turned out quite political and surprisingly rhymed.

the limit of a nation.

For power, laws and businesses

convince the world to be.